Aquaman may be a comic book hero, but Chevron engaged real-life “aquamen” called saturation divers at two of our major capital projects offshore.

Saturation diving allows divers to work at great depths for long periods of time. The divers live in a pressurized system on a specialized dive support vessel (DSV) for up to 28 days, travelling to the seabed in diving bells – separate chambers that are lowered deeper into the water to the work site. Several three-person dive teams live in this pressurized system. “Bell runs” are made to transport divers (generally, three people at a time) to the subsea work site. Each bell run lasts no longer than six hours, during which time two divers work on the seabed, while the third diver remains in the bell to provide support to the other two.

The Wheatstone Project, offshore Northwest Australia, and Mafumeira Sul Project, offshore Angola, have both achieved outstanding safety performance on these high-risk activities, enabling the projects to progress towards delivery of first oil and gas.

Time to get technical: The Wheatstone subsea system consists of six infield flowlines that connect the Iago and Wheatstone North and South drill centers through risers on the platform. A 44-inch diameter trunkline connects the platform to the onshore gas plant at Onslow 120 nautical miles away.

divers working under the wheatstone project

Divers support the subsea construction activities below the Wheatstone Project. Sixty-eight spools were deployed and installed to connect the subsea system and the gas plant to the platform. 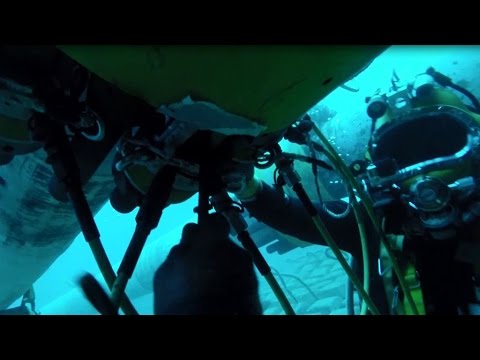 Between November 2015 and February 2016, in water depths ranging between 72 meters to 80 meters around the Wheatstone platform and 119 meters to 243 meters at the drill centers, a total of 68 spools were deployed and installed to connect the subsea system and the gas plant to the platform. While work-class remotely operated vehicles completed the diverless spools at the drill centers, saturation divers on the DSV Wellservicer successfully tied in 38 flanged spools and installed four hydraulic/electric control umbilicals to the platform.

Subsea installation coordinator Douglas Hunter said, “The safety of the divers was the highest priority for all parties during the planning and execution of this work. The completion of the DSV work was a major success story involving hundreds of people on and offshore to support the divers.”

A diving bell being lowered to the ocean bottom would serve as habitat for divers working on laying the Mafumeira Sul subsea pipeline.

Much of the work was conducted close to the platform and it was not uncommon for the DSV and the divers working below to be positioned as close as 33 feet (10 meters) to the platform legs. Therefore it was essential that regular and detailed reviews of platform and subsea work were undertaken and work permits were rigorously checked to mitigate the risk of dropped objects from the platform topsides.

“Well defined communication protocols were established between the DSV, the platform and the heavy lift construction vessel, which lifted the spools from barges into the water, and other vessels working within the platform 500-meter safety zone,” added Hunter. “Combined with the platform Permit-To-Work system,* this provided a robust framework to undertake detailed simultaneous operations plans to ensure the safety of all teams. The crystal clear water also helped.”

Upstream Health, Environment and Safety Manager Andy Turner noted, “We recognized that this was going to be a high-risk activity, but the outcome was a testament to the planning and execution of both Chevron and our subcontractors. It has not been without its challenges, but with an excellent safety record across the whole DSV crew and support team, we have not had any recordable incidents or injuries.” 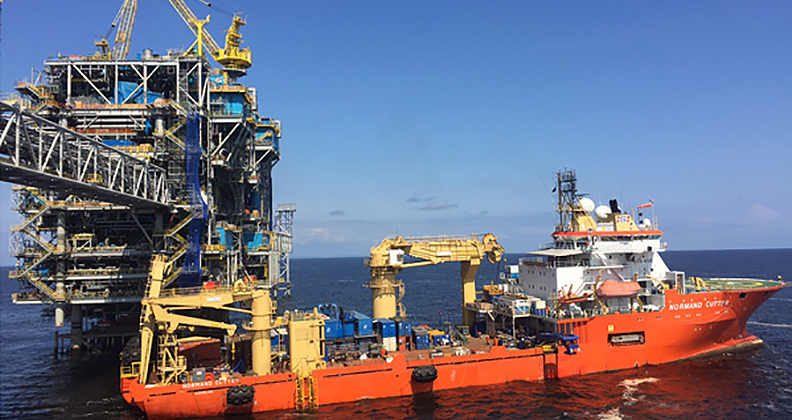 In this photo, the vessel responsible for transporting the Mafumeira Sul divers to the ocean floor is seen in close proximity to the project platform.

At the Mafumeira Sul Project, saturation diving was very similar to Wheatstone and performed in two stages: from October 2014 to August 2015 and from October 2015 to May 2016. The work included installation of five risers on existing operating platforms, 54 tie-in spools and two power cables between platforms. During the first phase, the work had to be coordinated at a time when there were more than 40 vessels operating in the field.

The DSV team faced another challenge, since offshore Angola waters are subject to some very sudden and fast-moving currents. In the case of Mafumeira Sul, these currents were accentuated by the field’s proximity to the mouth of the Congo River. Since the fresh water from the river is less dense than the ocean water, it shoots out across the surface of the ocean.

“We had to maintain a spotter vessel to detect when one of these currents was headed our way and then stop operation before it arrived,” said Ahmed Omar, subsea pipeline manager for the project.  “In a 24-hour period, we sometimes experienced as many as three or four of these currents.”

In addition, since the murky water at the location allowed almost no visibility, the divers worked virtually blind. “It took tremendous operational discipline to manage the work safely in this situation over such a long period of time,” said Ignacio Quintero, the offshore subsea construction manager.

Mafumeira Sul was one of the first Chevron projects to implement the IIF (Incident- and Injury-Free) Protocol Planning Guide. The contractor companies’ senior leaders and project teams collaborated to create the project safety plan.

“For the subsea pipelines, we recognized early on that the diving work would be a high-risk activity,” said John Sheets, delivery manager for the Mafumeira Sul subsea and brownfield contracts. “We leveraged the experience of the contractor’s personnel and lessons learned from previous projects to define what would be needed to execute our diving campaign safely.”

The Mafumeira Sul dive support team included employees from around the world.

A safety mindset prevailed throughout the project and was conveyed to everyone who worked on it. “Safety was not a separate effort performed by safety professionals,” said Sheets. “Instead, each person understood their role in maintaining safe work, as safety became part of the work.” The approach paid off, as the DSV work recorded no lost-time incidents or injuries.

“We had good communication and coordination among the many nationalities working on the DSV as well as on the platforms and other vessels,” added Travis McDermott, Mafumeira Sul project manager. “Our team and contractors were able to maintain our safety culture focus and work well together through challenging simultaneous operations, allowing this work to not significantly impact the hook-up and commissioning work on our Production Processing Platform.”

*A permit-to-work system is a documented safe-work practice that serves as an administrative control to prevent unauthorized execution of work. It is also identifies and transmits relevant information to workers in order to safely execute their jobs.