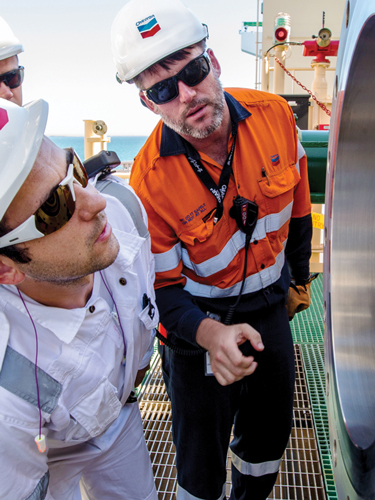 Wes Lohec, Chevron’s vice president of Health, Environment and Safety, knows that even the smartest, most capable and most diligent employees will make mistakes during their careers. “Humans aren’t perfect, so the question is: How do we make sure that human error doesn’t lead to a significant incident?”

Our ability to deliver energy safely is focused on building several layers of safeguards into everything we do. We’ve spent more than 20 years designing and improving systems that support a strong culture of safety and environmental stewardship. We call this “operational excellence” (OE). At its foundation is the belief that we can prevent serious incidents by properly managing risk.

“Our challenge is to operate with discipline – to be relentless – in executing the best practices and procedures that have been carefully developed in each of our operations,” Lohec said.

It’s not easy to create and reinforce an effective safety culture given the complexity of our businesses and the diversity of our locations and global workforce. To meet these challenges, we developed the Operational Excellence Management System (OEMS), our companywide systematic approach to manage process safety. One of its end goals is to make sure that our employees and contractors go home safely every day.

In 2015, we had one of our best years in overall performance and our best year ever in preventing serious incidents.

We outperformed 2015 targets across all of our core workforce safety, process safety and environmental metrics. We set a record-low Days Away From Work Rate for our employee and contractor workforce, at 0.018 per 200,000 work-hours, which beat our 2014 rate. We also achieved a record low in motor vehicle incidents.

We have achieved industry-leading performance in preventing injuries. Nevertheless, we are still experiencing incidents that lead to fatalities, which is not acceptable to us. Our focus on safety works, but it’s an ongoing job. For example, our employee and contractor workforce achieved the longest period without a fatality in company history — 477 million work-hours — prior to a fatality in 2015. Each incident and fatality is thoroughly investigated to understand the root causes and learn from them. We then share lessons learned throughout the company and apply them in our daily practices. We are also working with other companies in our industry to improve work processes to help us prevent serious incidents.

In 2015, in our quest for zero incidents, we introduced our Serious Injury and Fatality (SIF) metric, which requires us to intensify scrutiny of actual incidents as well as near misses. In addition to using SIF, our San Joaquin Valley business unit (SJVBU) uses a verification and validation program to assess workers’ competencies at job sites with high-risk activities, such as working on electrical systems. The SJVBU also has implemented Human Performance training, which provides workers with practical tools to reduce the potential for errors by evaluating and integrating personal tendencies. More than 2,300 workers were trained in 2015, and another 1,000 will be trained in 2016.

Chevron Shipping Company’s (CSC) comprehensive commitment to OE has resulted in industry-leading safety and environmental performance. CSC had zero Days Away From Work incidents in 2014 and 2015, and its operated fleet hasn’t had a cargo or bunker spill since November 2003.

This performance is the result of committed leadership and dedicated employees focused on achieving a common goal – zero incidents. Our Avoiding the Big Incident study completed in 2012 involved an analysis of CSC’s procedures and policies to reduce the possibility of a process safety incident and spawned projects to reduce the likelihood of a catastrophic ship-related incident. Complex procedures were rewritten to be simpler and clearer and review processes for new ships were updated to ensure that designs reduce the risk of incident. In 2015, CSC opened the Marine Learning and Development Center in Scotland to provide rigorous mariner training for the organization.

Chevron Pipe Line Company (CPL) is one of the first in the pipeline industry to adopt PortVision® – a vessel tracking system that helps identify and prevent problems before incidents occur – as well as round-the-clock monitoring in its Pipeline Control Center, advanced leak-detection camera technology and predictive analytics in its pipeline risk management program.

In 2015, CPL received the American Petroleum Institute Distinguished Safety and Environmental Award in the large operator category for a “consistent record of safety and environmentally sound operations.”

For Chevron, getting results the right way happens throughout the life of a project.

One example is our complex El Segundo Refinery Coke Drum Reliability project to replace six massive coke drums — enormous containers that heat crude oil to 920 degrees Fahrenheit (493° C). The project was honored by the nonprofit Project Management Institute (PMI) with the 2015 PMI Project of the Year Award. The massive project was completed without a single lost-time injury. In 2015, the refinery also received the Distinguished Safety Award and was named the safest operating refinery in the United States by the American Fuel & Petrochemical Manufacturers Association.

The importance of operational clarity and consistency needed to prevent incidents is shared by all of our business units, many of which are in a different hemisphere. In Nigeria, contractors often speak different languages and come from different cultures of safety. As this business unit’s massive Meren gas gathering compression platform topside was built in South Korea and installed in Nigerian waters, project leaders reinforced a “one team” mentality to improve collaboration among a diverse workforce. Nigerdock, a subcontractor for multiple platform components, reported 1.23 million work-hours without a lost-time injury in 2014. 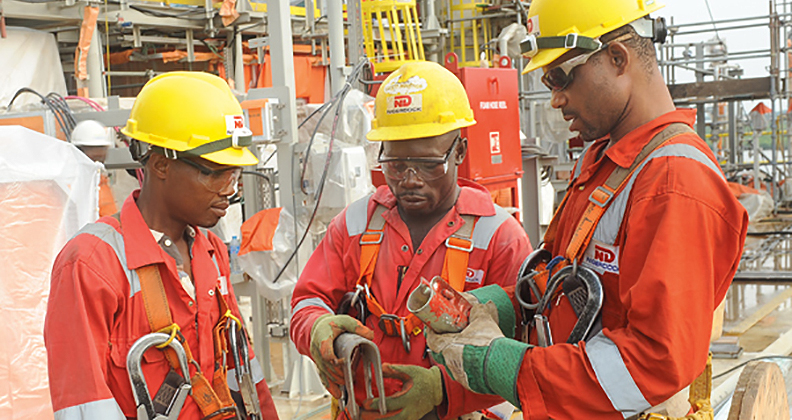 Contract workers for Nigerdock, a subcontractor for multiple components of the Meren gas gathering platform in Nigeria. Nigerdock reported 1.23 million work-hours without a lost-time injury in 2014.