featurebones, bombs, buried treasure – all in a day's work

When you're in the business of producing fossil fuels, actual fossils may sometimes cross your path. Dinosaur bones, shipwrecks, grave sites and cultural artifacts are all among the discoveries our workforce has the potential to encounter during the course of business – and when found, these items are treated with the respect they deserve.

Unusual stuff – and how we deal with it
Exploring for oil and gas has a lot in common with archaeological digs. At Chevron, we've built archaeological awareness into our operations, being sensitive to the possibility that historical remnants, such as dinosaur remains and other fossils may exist in the same area in which we're drilling for oil and gas. The same awareness and procedures are helping us to identify other objects that require special handling.

The key to our handling of all buried artifacts lies in our Environmental, Social and Health Impact Assessment (ESHIA) process, which provides screening checklists to consider potential risks, especially if a project occurs in or near an area that is protected under local, national or international law for its ecological, cultural or other values.

Putting the fossil in fossil fuels
The value of having well-established processes was demonstrated in 2010 when Chevron Argentina colleagues discovered important artifacts while performing routine maintenance at the vast El Trapial oil field in the Neuquén Basin of western Argentina. The artifacts consisted of fossilized bone structures belonging to a 66-foot-long (20 m) herbivorous dinosaur.

In response to other dinosaur fossils found in the area, Chevron has partnered with the National University of Comahue in support of Proyecto Dino, the country's largest dinosaur excavation project. The company's support also extends to many other paleontology initiatives such as professional training and research activities.

To date, the Proyecto Dino paleontologists have uncovered more than 1,000 fossil pieces belonging to vertebrates and plants, comprising an almost complete ecosystem from the Cretaceous Period. Once the recently discovered fossils are recovered and studied, they will be stored at the Museum Municipal Argentino Urquiza in Rincon de los Sauces, also located in the Neuquén Province, where they will contribute to the scientific body of knowledge and help paleontologists understand the ecology of the region more than 65 million years ago

"What we are excavating is the nation's heritage," said Jorge Calvo, paleontologist and geologist working in dinosaur research. 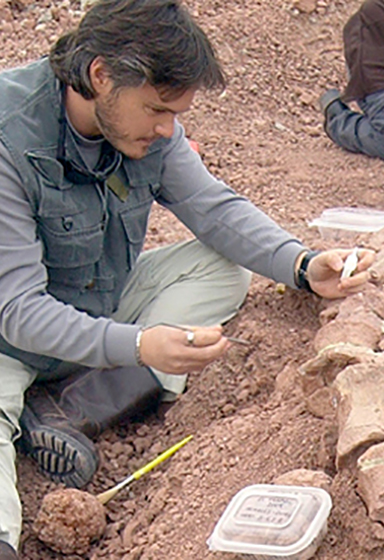 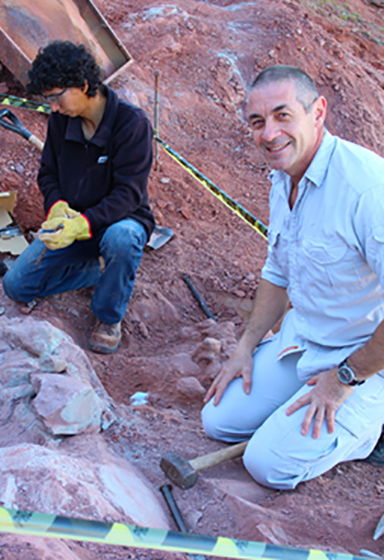 Tracing early inhabitants of Tengiz
A similar process of discovery has occurred in Kazakhstan since 2011, when our joint venture Tengizchevroil (TCO) began the Future Growth Project/Wellhead Pressure Management Project (FGP/WPMP) at the Tengiz Field. Thus far, workers there have made more than 100 historic finds, including pieces of ceramic pots; stone and early iron tools; grave sites partially uncovered by years of erosion and steppe winds; and ornate, carved stone grave monuments. As FGP/WPMP infrastructure work continues, project crews will be on the lookout for other cultural remnants of these early inhabitants of Tengiz.

TCO representatives meet regularly with the Atyrau Region Department of Culture for Protection of Monuments to help preserve the area's rich cultural heritage. Concurrently, TCO established a procedure for the protection of historical monuments. When historic artifacts are found, contractors must suspend work before enclosing the territory and informing TCO management so the appropriate government bodies can be notified and appropriate preservation steps taken.

Protecting underwater sites
In the U.S. Gulf of Mexico (GOM), we routinely run archaeological surveys using both sonar and remotely operated vehicles before drilling in any area. This procedure is required by our leases and conforms to local regulation. We are particularly alert to ensure that our activities don't affect any archaeological resources on the Outer Continental Shelf. These resources include any drowned terrestrial prehistoric sites dating to the Late Pleistocene/Early Holocene period when sea levels were substantially lower than they are today. The same caution applies to historic sites such as shipwrecks or downed lighthouses. If our GOM operations people discover man-made debris that appears to indicate the presence of a shipwreck, we immediately halt operations, ensure that the site isn't disturbed in any way, and contact the authorities.

Rooting out a war's remnants
We're alert to a different kind of artifact in the Partitioned Zone's Wafra Field, between Saudi Arabia and Kuwait, where our seismic 3-D survey project includes a special channeling technology to comb the area for unexploded ordnances (UXO) that are remnants of the early 1990s Gulf War. Thus far, the seismic team has discovered more than 70 UXOs, which have been removed from their locations by Kuwait military personnel.

"Because the survey covers vast areas of the desert, we're going to sweep for landmines in remote places that for many years have not seen the human footprint," said Ibrahim Hakam, senior geophysical operations advisor. "As we visually peel away the surface layers we find that there's more to these locations than meets the eye. We find a historical track chronicled within an area's geological layers."

Before taking on its assignment, the team received a thorough safety orientation and overview of examples of UXO devices that have been found in the region and the dangers associated with them. While the PZ has been swept for mines several times since the war, there remain UXO devices buried by weather conditions or too obscure to find until now. Chevron's 3-D survey is the biggest onshore survey ever undertaken and the fifth largest in the world covering 4,600 square kilometers (1,776 sq mi). As of year-end 2015 it was more than 75 percent complete.

"In the course of searching for oil or building new facilities, Chevron occasionally makes unexpected discoveries such as historical or cultural artifacts," said Jennifer Michael, senior policy adviser for Global Issues & Public Policy. "Wherever our operations encounter objects that require special handling, the ESHIA process provides us with the necessary steps for proceeding safely; we respect sites of historical and cultural significance and work to preserve cultural heritage for our future generations.