Drones descended on California’s San Francisco Bay around our Richmond Refinery late last year as part of an oil spill response exercise led by Chevron. These Unmanned Aerial Systems (UAS) proved they have great potential to reduce health and safety risks and improve the efficiency of collecting crucial data during an emergency response situation. 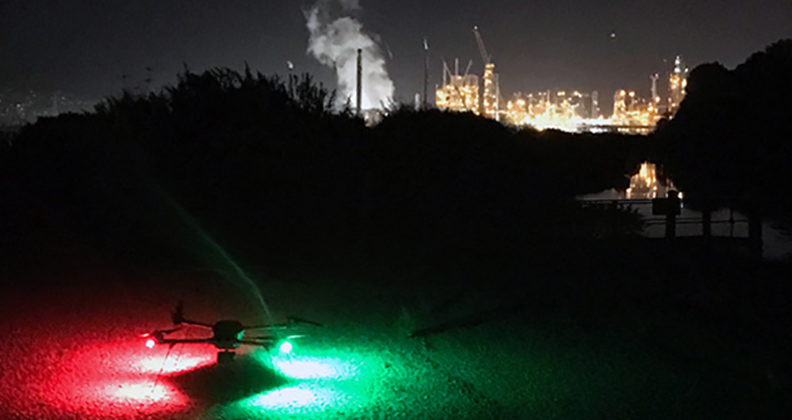 A drone is deployed at night during a recent spill drill near our Richmond Refinery. The event saw drone flights identify more than 70 percent of oil targets along five miles of coastline.

Over a week-long period, the team performed numerous flights using different types of drones outfitted with various camera systems to test their capabilities for mapping and measuring oil buildup on coastlines and for tracking oil slicks offshore. During an oil spill response, these types of observations are typically made using trained observers who fly in helicopters or planes or via direct field inspections. Drones have the potential to provide an improved approach to making these observations as they reduce the health and safety risks of putting people in aircraft or in high-risk environments such as rugged/rocky coastlines. Speed of deployment is another advantage – drones are available on site for immediate launch without the lead time needed to ready an aircraft and pilot for takeoff.

As part of the exercise, the team used biodegradable “simulated oil slicks” made from rice hulls (waste products from refinement of rice) and black biodegradable fabric patches. The slicks, which were recovered and removed after the drill, provided targets for detection by the oil spill observers using the drone imagery over coastal and offshore areas. 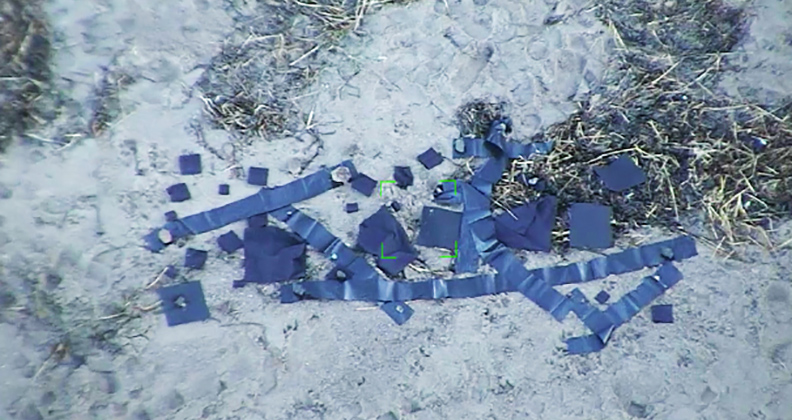 “The outcomes of the tests really highlighted the value of using aerial imaging from drones to identify and confirm the presence of oil on coastlines. We were able to successfully identify even relatively small patches of ‘simulated’ oil along the coastlines we surveyed that included areas impossible to access on foot.”

The team hopes to build on these successful tests to develop guidance around the use of drones to support assessment of shoreline oiling conditions and gain full acceptance for drone usage by the oil spill response community. During the exercise, the team also tested the use of drones at night and the capacity to launch, recover, and operate a drone from an offshore vessel.

“Both tests demonstrated the flexibility and unique capabilities that drones afford for making aerial observations in support of an oil spill response,” Haselwimmer said. “By operating a drone at night we can potentially expand the period when we can make detailed aerial observations of an oil slick up to 24 hours. In addition, vessel-based operations open up significant opportunities for performing coastline surveillance of areas that are impossible or hard to reach on foot.” 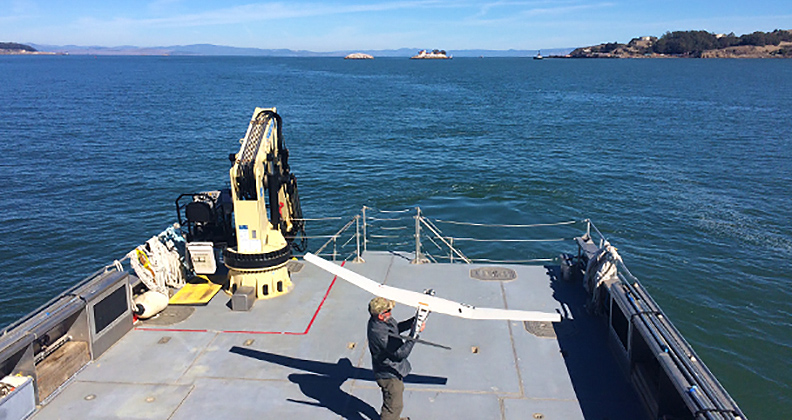 A drone is launched from an offshore vessel to detect simulated oil slicks during a recent emergency response drill near our Richmond Refinery.

Hosted at the Richmond Refinery Fire House, the drill also highlights the company’s mutual response capabilities. Emergency Services Response coordinator Dan Tydingco said, “We’re always happy to host drills of this magnitude with so many vital agencies involved, especially when testing new capabilities. It’s a win for us to have all these agencies familiar both with our capabilities and our personnel. It’s partnerships like this that demonstrate our commitment to protecting the community and the Bay Area.”