SAN RAMON, Calif., March 20, 2016 – Chevron Corporation (NYSE: CVX) today announced that its first shipment of liquefied natural gas (LNG) from the Gorgon Project has departed Barrow Island off the northwest coast of Western Australia. The cargo will be delivered to one of Chevron’s foundation buyers, Chubu Electric Power, for delivery into Japan.

“Departure of the first cargo from the Gorgon Project is a key milestone in our commitment to be a reliable LNG provider for customers across the Asia-Pacific region,” said Mike Wirth, executive vice president, Chevron Midstream and Development. “This is also important for our investors as we begin to generate revenue from a project we expect will operate for decades to come.”

LNG is an essential fuel for power generation across Asia, and natural gas is among the fastest growing segments of Chevron’s energy portfolio. Chevron’s Australian projects are well located to supply natural gas for the region and more than 80 percent of Chevron’s Australian subsidiaries’ equity LNG from the Gorgon and Wheatstone projects is covered by sales and purchase agreements and heads of agreements with customers in the Asia-Pacific region. 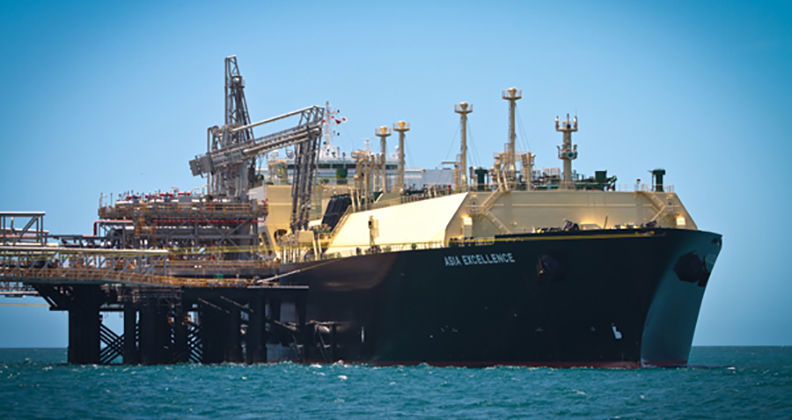 The LNG cargo will be delivered by the Asia Excellence, one of Chevron's new state-of-the-art LNG carriers. To support Chevron’s growing position as a leading LNG supplier, Chevron Shipping Company is in the final stages of its largest shipbuilding and fleet modernization program in recent history, which includes the addition of six new LNG carriers to its operated fleet.

The Gorgon Project is supplied from the Gorgon and Jansz-Io gas fields, located within the Greater Gorgon area, between 80 miles (130 km) and 136 miles (220 km) off the northwest coast of Western Australia. It includes a 15.6 MTPA LNG plant on Barrow Island, a carbon dioxide injection project and a domestic gas plant with the capacity to supply 300 terajoules of gas per day to Western Australia.

Chevron Corporation is one of the world’s leading integrated energy companies. Through its subsidiaries that conduct business worldwide, the company is involved in virtually every facet of the energy industry. Chevron explores for, produces and transports crude oil and natural gas; refines, markets and distributes transportation fuels and lubricants; manufactures and sells petrochemicals and additives; generates power and produces geothermal energy; and develops and deploys technologies that enhance business value in every aspect of the company’s operations. Chevron is based in San Ramon, Calif. More information about Chevron is available at www.chevron.com.

Read this press release in Chinese

Read this press release in Japanese

Read this press release in Korean

Some of the items discussed in this press release are forward-looking statements about Chevron. Words or phrases such as “anticipates,” “expects,” “intends,” “plans,” “targets,” “forecasts,” “projects,” “believes,” “seeks,” “schedules,” “estimates,” “may,” “could,” “should,” “budgets,” “outlook,” “on schedule,” “on track,” and similar expressions are intended to identify such forward-looking statements. The statements are based upon management's current expectations, estimates and projections; are not guarantees of future performance; and are subject to certain risks, uncertainties and other factors, some of which are beyond the company's control and are difficult to predict. Among the important factors that could cause actual results to differ materially from those in the forward-looking statements are changes in prices of, demand for and supply of crude oil and natural gas; the company’s ability to realize anticipated cost savings and expenditure reductions; actions of competitors; the results of operations and financial condition of the company’s suppliers, vendors, partners and equity affiliates, particularly during times of low prices for oil and natural gas; the inability or failure of the company's joint-venture partners to fund their share of operations and development activities; the potential failure to achieve expected net production from existing and future crude oil and natural gas development projects; potential delays in the development, construction or start-up of planned projects; the potential disruption or interruption of the company's operations, net production or manufacturing facilities or delivery/transportation networks due to war, accidents, political events, civil unrest, severe weather, cyber threats and terrorist acts; other natural or human causes beyond its control; changing economic, regulatory and political environment in Australia; government-mandated sales, divestitures, recapitalizations, industry-specific taxes and changes in fiscal terms or restrictions on scope of company operations; foreign currency movements compared with the U.S. dollar; material reductions in corporate liquidity and access to debt markets; general domestic and international economic and political conditions; and the company’s ability to identify and mitigate the risks and hazards inherent in operating in the global energy industry. The reader should not place undue reliance on these forward-looking statements, which speak only as of the date of this press release. Unless legally required, Chevron undertakes no obligation to update publicly any forward-looking statements, whether as a result of new information, future events or otherwise.