Chevron is one of the largest producers of crude oil in Indonesia and is active in a range of projects, from extending the output of mature fields in Sumatra to developing new assets in the deep waters of Kutei Basin. Factors affecting energy investments in the country were the focus of a recent interview with Chuck Taylor, managing director of Chevron’s IndoAsia business unit, part of Chevron Asia Pacific Exploration and Production Company. Here are highlights from that conversation. 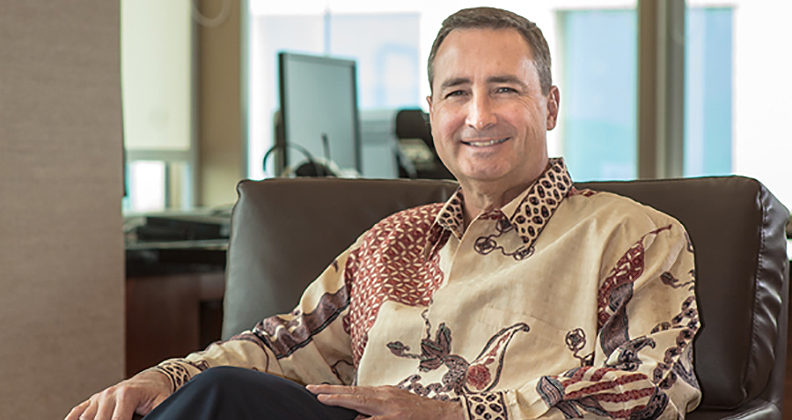 You head one of Indonesia’s largest oil and gas operations. How do you assess Chevron’s contribution to the country?
Chevron has been in Indonesia for more than 90 years. And we’re currently Indonesia’s largest foreign investor and largest oil and gas investor. Over those nine decades, we have generated close to US$200 billion in government revenue for Indonesia. An economic footprint study that we conducted in 2014 in cooperation with the University of Indonesia reveals that Chevron spending for operations in Indonesia sets in motion a series of positive economic ripple effects throughout the nation’s economy. Chevron’s Indonesian operations contributed more than US$11.9 billion to the nation’s gross domestic product in 2013, accounting for 1.4 percent of Indonesia’s GDP.

How do you see the oil and gas sector contributing to the Indonesian economy?
The oil and gas sector is of strategic importance to the nation, providing significant government revenue and a major contribution to the economy and the people of Indonesia. Despite low oil prices, the upstream energy industry remains one of the major contributors to the nation’s economic growth. Last year, it totaled US$23.7 billion – or about 3.3 percent of Indonesia’s GDP and approximately 25 percent of non-tax national revenue.

Local and national economies also benefit greatly from a multiplier effect in areas such as employment, infrastructure, development of local businesses and transactions through national banks.

There are approximately 280,000 people employed in the upstream oil and gas sector. In Indonesia, Chevron currently employs about 4,700 people, more than 98 percent of whom are Indonesian nationals. We have also trained over 1,000 Indonesian employees through international development assignments outside of Indonesia.

How are Chevron and other energy companies adapting to the current prices?
As the price of crude oil remains low, energy companies have been challenged to find ways to lower costs and be more selective in investments that can deliver returns with lower prices. However, even with low prices, I believe there are things that can be done to strengthen investment.

Tell us more about Indonesia's effort in securing its energy needs in view of the current regulatory environment.
Despite the industry’s significant ongoing contribution to the economy, the country faces a widening supply and demand gap as energy demand continues to grow in conjunction with population and economic growth. This is what most people think about when we refer to the “energy crisis.”

The Indonesian government’s National Plan for Energy appropriately identifies the need to address energy security. However, I would suggest that energy security should not be as urgent a concern as addressing the broader economic implications of import versus domestic development and production. After all, oil is a fungible commodity and even natural gas is becoming more fungible when it is converted into LNG (liquefied natural gas).

What other factors are contributing to Indonesia’s current energy crisis?
Indonesia is experiencing a more rapid decline in domestic development than many other nations, yet we all have the same oil price. Reduced investment in Indonesia leads to an accelerated decline of production, reduced government revenue and fewer jobs. It also means greater import-export imbalance with broader economic impacts.

Simply put, when Indonesia imports energy, it funds others’ economies. By contrast, if Indonesia stimulates domestic development and production, the nation grows its economy through infrastructure development, government revenue and employment.

How are the Indonesian government’s current policies affecting investment?
For many years, the government’s share of oil and gas revenues has been one of the highest in the world. This has led to lower returns for investors and less ability to compete for capital.

What will create a more favorable investment environment for oil and gas producers?
To compete more effectively for capital in this country, we need an investment environment based on legal certainty, fiscal certainty and fiscal competitiveness. Revenue sharing that can create competitive returns for investors and attract capital is foundational. Additionally, we need regulations founded on sound data and global best practices, timely government approvals, a simplified permitting process and alignment across the various levels and divisions in the government.

What is your view of Indonesia’s energy future – and what is Chevron’s role in it?
I am confident that there is truly an energy opportunity in Indonesia, which can increase investment and in so doing, capture the true economic potential of our industry. Chevron is proud of its strong partnership with the people and government of Indonesia. We are committed to supporting the country to develop its energy resources safely and reliably. We already have major operations from the Duri and Minas fields in Sumatra to the offshore Kutei Basin. The Bangka project, which represents the first phase of the Indonesia Deepwater Development, started production in August 2016.

I have worked in Indonesia for eight years over two different assignments and have had the privilege to work with Indonesians who are not only competitive in Chevron worldwide, but are some of the best and brightest in the industry. It’s these people who make me optimistic about the future of Indonesia and the future of oil and gas in Indonesia.