The Chevron-operated Lianzi Field – which achieved first production on schedule in November 2015 – is located in a unitized offshore zone between the Republic of Congo and the Republic of Angola.

The unitized zone essentially allows for the free movement of personnel, vessels, materials and equipment into and out of the Lianzi unit from either country. Serge N'Siemo, Lianzi asset manager with the Southern Africa strategic business unit (SASBU), represented Chevron alongside members of our Legal and Commercial groups during negotiations of the zone's governance structure, working structure, customs and immigration protocols, and local content requirements.

"It was a unique cooperative approach to share offshore resources," N'Siemo said, and suggested that the agreements could serve as a model for other West African countries that want to see production of cross-boundary reserves. "The project involved two countries, three languages and eight partners, including two national oil companies," N'Siemo added. "All parties played a good role and have been fully engaged to achieve the project results." 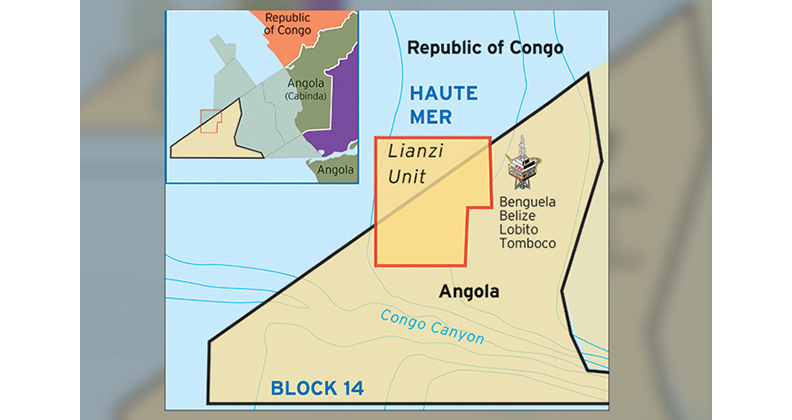 Mark Dunn, with Project Resources Company, joined the team as Lianzi project manager in 2009 when the front-end engineering and design phase began – five years after hydrocarbons were discovered in the field.

After considering various ways to develop Lianzi's reserves, the decision was made to tie back to the existing Benguela Belize-Lobito Tomboco (BBLT) platform located in Angola's Block 14. "BBLT had excess capacity and made the most economic sense," Dunn said.

The project plan was sanctioned in 2012, and Lianzi became Chevron's first operated asset in the Republic of Congo.

Development drilling at Lianzi began in October 2014, while offshore installation and upgrades to BBLT to accommodate the Lianzi production began in January 2015. The development project included a subsea production system and a 27-mile (43-km) flowline system to transport the oil from the Lianzi field to the BBLT platform.

“We were able to execute the offshore campaign safely, without any major incidents,” Dunn added.

Dunn points out that, from a subsurface standpoint, the Lianzi reservoir is very similar to Block 14. Further, a series of laboratory tests concluded that Lianzi crude is very close to what is already being produced at BBLT.

Because of these similarities, Dunn said, they knew they needed to maintain pressure for optimal production results. “We've learned the importance of water injection support,” Dunn pointed out. To address this, Chevron is using four production wells and three water injection wells across the eight-mile length of the field, which lies in water depths of approximately 3,000 feet (900 m) of water.

The distance from Lianzi to BBLT presented flow assurance challenges, such as managing the risk of wax and hydrate formation through the flowline. “To address these challenges, we looked at a couple of different alternatives,” Dunn said.

Chevron opted for a direct electrical heating (DEH) system, which warms up pipelines by transmitting electrical alternating current from the topsides via a cable piggyback strapped to the far end of the pipeline. The current returns through the steel in the pipeline and creates heat, which warms the fluid inside the pipeline to a temperature high enough to prevent wax and hydrates from forming.

The system, which had been proven in the North Sea, but had never been used offshore West Africa or at these water depths, is a first for Chevron.