the mother with the
heart of a lion

In Bayelsa State, Nigeria, one courageous woman is opening her heart to offer hope and turn the tide against HIV/AIDS. Judith Vianana overcame doubt and hostility in order to be diagnosed, seek counseling and begin the course of treatment that would extend her life and the lives of countless others. 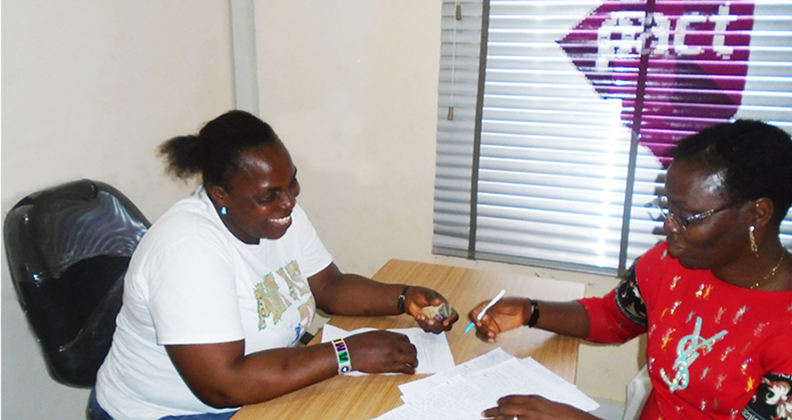 In 2001, Judith Vianana faced a harrowing ordeal. Her first husband had been diagnosed with HIV but he kept the truth from the family. As a tragic consequence, her infant son, who remained undiagnosed and untreated, succumbed to the disease that year. When Judith accidently discovered her husband’s positive test results, she confronted him. “He said that he was scared to tell me,” she said. “I had already given birth to two male children. It was at this point that I knew what killed my youngest son – it was a very painful experience.”

Judith took her surviving son for testing at a Port Harcourt clinic where she learned that she was HIV-positive and her son was negative. Upon learning about her diagnosis, Judith and her son were turned away by her husband and his extended family, forcing her to care for her son without help. “I cried on a daily basis and I had sleepless nights. My main fear was that I was going to die and leave my son alone.”

In 2002, Judith’s husband died and she remained at great risk. Because she had not been offered treatment or counseling following her initial diagnosis, her disease had gone untreated. “I did not know who to go to or turn to, so I stayed for three years without getting any treatment,” said Judith.

But in 2004, Judith received a second chance when she learned that free testing and counseling would be available during the Bayelsa State World AIDS Day celebration. “I summoned the courage to go for the test and [found out my infection was progressing].That was when I was placed on drugs, which I have been taking [to this] day.”

Left: Locals in Bayelsa State, Nigeria often travel by boat to get to places such as health clinics. Right: Pregnant women visit a local health clinic to be tested for HIV and receive counseling.

Chevron partners with Pact to support local groups like Kindling Hope Across Nations, the group that first provided Judith with counseling and encouraged her to share her story and inspire others. Despite the community stigma, Judith fearlessly speaks out to share her story with groups of at-risk women. She answers the same questions each time: Wasn’t she embarrassed or afraid? Did people avoid her? Did she fear the stigma? How did she have HIV-free children? Was it even possible? To convince the doubters, she offers proof – her antiretroviral drugs.

“I do not joke with my drugs,” she said. “I am healthy because I adhered to my drugs all through my [last] three pregnancies [with my second husband] and I also kept good eating habits.”

Judith’s direct interventions have pulled back countless lives from the brink. “There have been so many,” she explained. One couple with an HIV-positive woman was rapidly nearing a break-up, but Judith’s counsel saved their marriage. The husband is now the one who reminds his wife to take her drugs every day and they are living happily together with a healthy and [HIV] negative baby.

Today, Judith continues to be an advocate for preventing mother-to-child transmission of HIV, and lives in Nigeria with her husband and their three healthy HIV-free children.