download the case study in PDF opens in new window

The Niger Delta is about the size of Portugal with waterways that fan out like the intricate roots of the mangrove trees that grow in its swamplands. The delta also contains one of the world’s largest supplies of oil as well as one of the world’s most complex business environments.

Chevron has a 100-year history and long-term investments in Nigeria, making us the third-largest oil producer in the country and one of its largest investors. We operate under a joint-venture arrangement with the Nigerian National Petroleum Corporation (NNPC) for the onshore and offshore assets in the Niger Delta region, and we have extensive interests in multi-partner deepwater operations.

Thirty million people live in the delta, 70 percent in poverty. It has long endured violent conflicts between agelong ethnic rivals. In 2005, amid violent clashes, many of Chevron’s community development projects and production facilities were damaged or destroyed. As a result, the company pioneered the Global Memorandum of Understanding (GMoU).

The GMoUs were established between clusters of communities, Chevron, and state governments, creating a unique public-private model to promote economic and social stability. Working with partners we then helped to form Regional Development Committees (RDCs) for each GMoU. The RDCs are comprised of elected community members who represent local interests and oversee GMoU implementation in a specific region. Through the GMoUs, the RDC’s eventually assumed responsibility for how to use funding provided by the company and for implementing the projects selected. Chevron participates on local committees and boards that approve projects and provides annual project funding.

Youths from various Egbema/Gbaramatu communities at their graduation from a six-month skills acquisition program.

a new way of doing business

To create the GMoU model in 2005, we had to engage with 95 communities of different sizes, many of which competed over land ownership, compensation from land acquisition and community development projects.

“Turning over control of decisions on how to use community funding and having the community implement projects had never been tried,” said Brikinn Esimaje, Policy, Government and Public Affairs (PGPA) general manager for Chevron Nigeria Limited (CNL). “Prior to the GMoU, Chevron-funded projects were designed, planned, contracted and built by us.”

CNL legal counsel Lucky Nengite worked on the first draft of the GMoU. “Our role is to help communities help themselves. The GMoU is not a legal contract, but it is an agreement with the intention to create a moral responsibility on our part to do what we say we will do,” he said.

Currently, there are five RDCs in three states of the Niger Delta. RDC’s are credited with spurring construction of small rural “cottage” hospitals, guest houses, shoreline protection, solar-powered water projects, and the funding of scholarships. “Without the scholarships, they could have not gone to school,” said Prince Patrick Henry Ehinmola, chairman, Ilaje RDC. 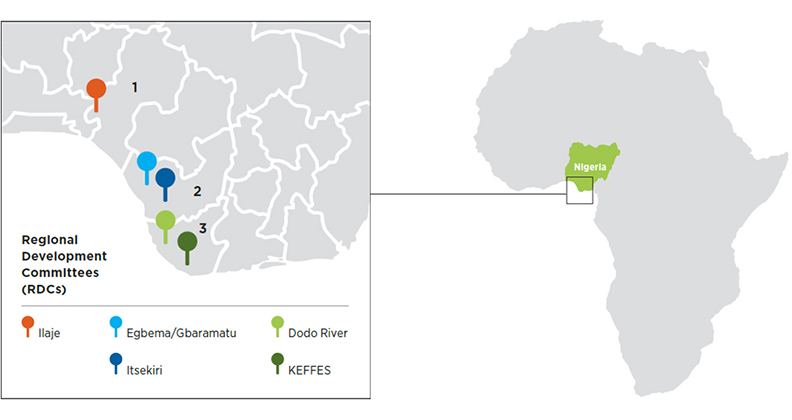 “The infrastructure development through the GMoU model is unprecedented,” said Joel Bisina of LITE-Africa, an NGO whose work strengthens communities in Nigeria. “The model has brought relative peace to Chevron’s areas of operation, though more still needs to be done.”

In 2015, Chevron launched GMoU+ to build upon the communities’ focus on infrastructure projects, increase household incomes, employment, and small businesses.

Complementing GMoUs, Chevron supports the Niger Delta Partnership Initiative (NDPI) to help reduce poverty and conflict. In 2010, we established the NDPI and its Nigeria-based implementing partner, PIND, with a $50 million endowment to help increase income and equitable economic growth. In 2014, Chevron committed an additional $40 million through 2019.

“Although socioeconomic challenges in the region persist, this combination of programs provides optimism amid the hard realities of daily life in Africa’s largest wetlands area,” said Mamadou Beye, NDPI chairman and PGPA general manager for CALAEP.

A 2016 independent report by the Initiative for Global Development (IGD) shows NDPI and PIND are achieving systematic, long-term change in the Niger Delta and bringing international attention and resources to the region.

“The greatest impact of the GMoUs is not the structures built, like a house or a hospital,” said Ali Moshiri, former CALAEP president, “it’s the radical change in the importance of consensus building and working through conflict. The GMoU has provided skills for communities to determine their own future and to make that future a reality.”

learn more about chevron in Nigeria