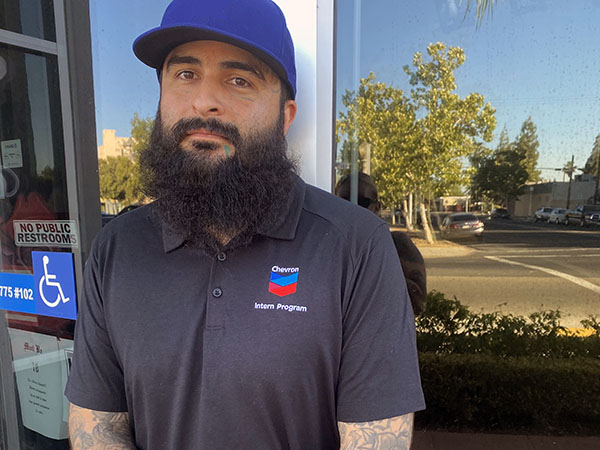 The inspiration for Paul Calvo began when his youngest daughter asked why she should go to college when her father hadn’t. Around the same time, Calvo’s sister, then a student at Fresno Pacific University, posed a problem she was working on in her upper-division statistics class, and what she explained made sense to him.

“And my sister was like, ‘What are you doing? You should go to college,’” he said.

Born and raised in Fresno, Calvo grew up in a neighborhood where educational resources were slim. He’d been to prison, had tattoos.

Today, Calvo is preparing for his first semester at Stanford University, where he is majoring in engineering. Meanwhile, this summer he’s been working to solve real-world problems as an intern with Chevron.

“I’ve had a blast,” Calvo said, jokingly adding, “Do I have to return to school?”

For Calvo, education has been key. Eventually giving into pressure from his daughter, mother and sister, the father of four enrolled at Fresno City College as an engineering student in 2017. He excelled academically, becoming a tutor and the vice president of the science and engineering club. After applying for scholarships from Chevron, Calvo reached out to a Chevron recruiter about a summer internship. He’d had some experience with the oil and gas industry as a pipeline welder helper, but feared his past would hinder his chances.

“I did put in my scholarship essays that I had been to prison, and the mentor I was working with knew as well,” Calvo said. He said his Chevron colleagues have been “super accepting.”

“That stigma is erased at Chevron” he said.

While he’s picked up “a boatload” of hands-on education as a summer intern, learning SQL (structured query language) for organizing and analyzing data has been central to his experience, and a lot of fun. Calvo lauds his mentors and colleagues as “really cool people.”

“They go out of their way to help,” he said. “At first I thought I’m just a little intern, at the bottom of the pool. But it’s been a cool experience. I’ve enjoyed it.”

Calvo envisions a future where he could join Chevron as a permanent employee and “do what I’m doing now but at a higher level.”

But perhaps his greatest aspiration is to one day create the kind of inspiration that got him to be interested in education and engineering. Calvo hopes to return to his community as a professor or mentor to youth, bringing robotics teams and STEM activities to underserved populations.

Until he’s in a position to give back to his community, Calvo plans to soak up everything he can learn from his internship experience. “Every time I meet with someone, I’m learning something new,” he said.

When he’s not pursuing his career goals, Calvo enjoys cruising around downtown Fresno on his BMX bike early in the mornings, or going riding on his dirt bike with his younger daughter, age 11, the “daredevil” of the group who rides a quad bike. His eldest daughter is 16, his son his 13 and his fourth child is on the way. He also enjoys oil painting. “I think I’m pretty good,” he said.

Chevron is committed to fostering diversity and inclusion at all levels of the company. The company knows that hiring and retaining individuals with an array of talents, ideas and experiences propels the innovation that drives its success.

“I have been privileged with a second chance. Chevron stands behind its claims of diversity and inclusion,” Calvo said. “By hiring people of color who have overcome criminal justice barriers, Chevron is paving the way and bridging gaps in racial disparities.”