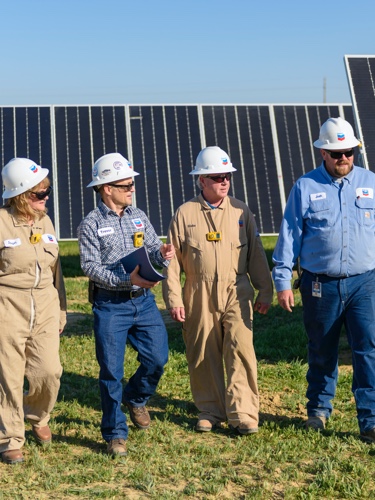 Affordable, reliable, ever-cleaner energy is essential to achieving a more prosperous and sustainable world. As we strive to lower the carbon intensity of our operations, we will grow lower carbon energy solutions that are part of the future. We intend to grow lower carbon businesses in renewable fuels and products, hydrogen, carbon capture, utilization, and storage, and offsets and emerging lower carbon opportunities. We will continue to meet the world's energy demand while working to advance a lower carbon future for all.

Biofuels, such as renewable diesel, can play an important role in reducing the lifecycle carbon intensity of transportation fuels while meeting the world’s growing energy needs. At Chevron, we are increasing our pursuit of renewable opportunities and seeking to make them scalable, sustainable, and affordable for consumers.

Our El Segundo Refinery in California is set to become the first refinery in the U.S. to co-process biofeedstock in a fluid catalytic cracker unit making gasoline, jet fuel and diesel fuel with renewable content. The refinery is expected to start supplying consumers in Southern California with biofuel products by
end-2021.

In a joint venture with Brightmark LLC, we’re developing projects across the United States to produce renewable natural gas and fund the construction of infrastructure and the commercial operation of dairy biomethane projects in multiple states, from which we will purchase RNG and market the volumes in California for use in vehicles operating on renewable compressed natural gas.

In 2019, we partnered with CalBioEnergy and dairy farmers to form a joint venture company, CalBioGas LLC, that produces and markets biomethane as a fuel for heavy-duty trucks and buses. These efforts mitigate dairy methane emissions and reduce waste. In 2020, we announced the first renewable natural gas production from dairy farms in the California Central Valley.

In July 2020, we partnered with California natural gas retailer Clean Energy Fuels Corporation on Adopt-a-Port, an initiative that provides truck operators serving the ports of Los Angeles and Long Beach with RNG. Truck operators and their import and export customers will help local communities by reducing smog-forming NOx emissions by 98 percent compared with diesel trucks.

Novvi LLC is a California-based company that engages in the development, production, marketing, and distribution of high-performance base oils from renewable sources. In 2018, Novvi and Chevron entered into an agreement to jointly develop and bring to market novel renewable base oil technologies. In 2020, Novvi reached first production of 100 percent renewable base oil from its Houston facility.

In 2019, Chevron was a part of the SFO landmark agreement for the use of Sustainable Aviation Fuels (SAF), a lower carbon alternative to jet fuel. It was the first project of its kind to include fuel suppliers, airlines, and airport agencies. The use of SAF could reduce GHG Emissions by nearly 4.8 million tonnes per year.

Biofuels that complement conventional transportation fuels, such as renewable diesel, can play an important role in reducing the carbon intensity of transportation fuels while meeting the world’s growing energy needs. Renewable diesel, also known as biomass-based diesel, is a hydrocarbon diesel vehicle fuel produced from non-petroleum renewable resources such as vegetable oils (soy, corn, canola, etc.), animal and poultry fat, used cooking oil, municipal solid waste, and wastewater sludges and oils. In 2017, Chevron began to distribute diesel fuel containing between 6 and 20 percent renewable diesel from some of our California fuel terminals. In April 2020, we began to supply Chevron-branded B20 diesel to commercial customers at Fontana Truck Stop Centers in California. B20 diesel contains biodiesel (up to 20 percent), renewable diesel (up to 20 percent) and fossil diesel (as little as 60 percent).

Already a leader in recycling, Waste Management (WM) now powers some of its trucks with gas emitted by its cargo. At Waste Management’s landfill gas-to-energy facilities, methane produced by decomposing trash is captured and used as an alternative fuel. More than half of the landfill gas collected at WM facilities goes to beneficial-use projects, making it North America’s leader in the space. Although much of WM’s landfill gas produces electricity, the Houston-based company is also a leader in converting landfill gas into natural gas fuels. Renewable natural gas (RNG) produced from processed landfill gas now fuels more than 33 percent of the company’s natural gas trucks. In 2018, Chevron and WM signed an agreement for Chevron to purchase gas produced by WM and ensure supply to WM’s trucks. “Chevron is a legacy supporter of our renewable natural gas program and recently increased that support by partnering with WM Renewable Energy to purchase the RNG produced at our American landfills,” said Randy Beck, senior director of renewable energy at WM. “This move furthers our commitment to each other, but more importantly, our commitment to sustainability initiatives.”

We are advancing hydrogen opportunities through strategic partnerships and by investing in demonstration projects and technologies related to production, transport, and storage.

Chevron is a board member of the California Fuel Cell Partnership. The organization supports a long-term vision for hydrogen in California and will be expanding across the United States in 2021. Chevron has partnered with the DOE on a hydrogen study that is exploring the potential of RNG to manufacture hydrogen. Chevron joined the Hydrogen Council, the industry’s leading international trade association. Through membership on the council, we gain access to industry best practices and are better positioned to explore hydrogen opportunities. Chevron is also a member of the OGCI transportation workstream focusing on hydrogen as a fuel.

Over the past decade, we have invested more than $1 billion in CCUS research, development, and deployment opportunities to reduce our GHG-emissions intensity. Project investments were primarily in Canada and Australia and include the Gorgon CO2 injection project, one of the world’s largest integrated CCUS projects. These projects are expected to reduce GHG emissions by nearly 5 million tonnes per year, approximately equivalent to the GHG emissions from the average annual electricity usage in 660,000 U.S. homes.

We are leveraging existing and building new commercial relationships with technology companies, pipeline companies, power providers, refiners, and other emitters to advance CCUS in key geographies.

National Energy Technology Laboratory
In 2020, we were awarded a project from the U.S. Department of Energy (DOE) to pilot technology that captures CO2 from post-combustion gas. In partnership with Svante, the DOE, and the National Energy Technology Laboratory, we will test the technology at our Kern River facility in San Joaquin Valley California, where we plan to design, construct, commission, and test a pilot-scale carbon capture plant.

Mendota BECCS Project
We are collaborating with Schlumberger, New Energy, Microsoft, and Clean Energy Systems (CES), working to develop a bioenergy with carbon capture and sequestration (BECCS) project in Mendota, California. The project is designed to utilize agricultural waste from California to produce renewable power using CES’s oxy-combustion technology, while capturing and permanently storing CO2 produced in the process into the geologic formation below the project site. The project is expected to result in net-negative emissions when fully operational, storing about 300,000 tons of CO2 annually—equivalent to the emissions emitted from electricity usage by more than 65,000 U.S. homes.

National Research Foundation
In 2020, we joined a consortium with the Singapore National Research Foundation and other companies. We are working to jointly develop the first end-to-end decarbonization process in Singapore. This collaboration is aimed at accelerating the development of a highly integrated, energy-efficient CCUS system that can lead to a lower-carbon economy and potential commercial developments for Singapore, as well as help the country meet its Paris pledge.

Carbon Engineering
Chevron is invested in Carbon Engineering to accelerate the commercialization of Carbon Engineering’s direct air capture (DAC) technology, which removes CO2 directly from the air. The technology is expected to be used as a mechanism to reduce emissions from transportation and enable permanent capture of existing atmospheric CO2.

Blue Planet
Chevron is invested in Blue Planet, which uses CO2 as a raw material for making carbonate rocks used in place of quarried limestone in building material. Additionally, we are exploring opportunities to collaborate on potential pilot projects and commercial development in key geographies.

In multiple lower-carbon scenarios, offsets are expected to make up a notable portion of global reductions, especially in sectors that do not have cost-effective reduction opportunities or for activities that are hard to abate. They are a complementary lever in our multipronged strategy to drive down our GHG-emissions intensity and can provide a mechanism for our customers to achieve their emissions reduction goals. Offsets can provide a path toward avoiding and removing emissions. Additionally, they provide an indirect link between countries and companies to collaborate in achieving the goals of the Paris Agreement. We participate in offsets markets in Colombia, the United States, and Canada, and partner with associations to enhance the global scaling-up of offsets, particularly those from natural climate solutions (NCSs).

World Bank
Chevron is party to a memorandum of understanding with the World Bank. The World Bank’s goal is to enhance global climate ambitions in mitigation actions and activities to facilitate the development of carbon and climate markets and associated infrastructure based on emerging international and national regulatory frameworks. Specifically, we seek to collaborate on activities that promote the establishment by the World Bank of facilities that may generate, warehouse, acquire, sell, and/or otherwise transfer mitigation outcomes in support of the Paris Agreement.

Acorns and One Tree Planted
In collaboration with Acorns, a saving and investing app in the United States, Chevron is piloting a new program in California to have five trees planted via the One Tree Planted organization every time a customer fills up at the pump. While not an offset credit–generating activity, the program provides an opportunity to better understand consumer interest in offsetting emissions from use of our products.
investinginlow-carbontechnologies

The viability of lower-carbon solutions that can achieve commercial scale is vital to meeting the energy needs of all people. We aim to leverage our market position, assets, organizational capability, technology and venture capital to pursue new and promising lower-carbon opportunities.

Emerging power technologies such as fusion technology and advanced geothermal are promising lower-carbon energy sources with less intermittency than other renewable sources. These technologies have the potential to change the way we produce and use energy.

Baseload Capital
Chevron is invested in Baseload Capital, a private-investment company focused on the development and operation of lower-temperature geothermal and heat power assets.

Read how our people are turning actions into meaningful results.

Our latest report provides an update and speaks to actions we are taking in support of a lower-carbon future.

In this report, we spotlight how our people, partnership and performance furthered humanity’s ability to thrive.

This report highlights work we are doing to address climate change risks to our business and new opportunities we are pursuing.