The Mafumeira Sul Project is part of a continued effort to grow Chevron’s production capacity in offshore Block 0 and contribute to the development of Angola’s oil and gas industry. The second stage of the Mafumeira Field development, Mafumeira Sul is located 15 miles (24 km) offshore Cabinda province in 200 feet (60 m) of water.

The project includes a central processing facility, two wellhead platforms and approximately 75 miles (121 km) of subsea pipelines. Associated natural gas from the field is commercialized through the onshore Angola LNG (liquefied natural gas) plant in Soyo. Early production from the project began in 2016. In 2017, the main production facility of the second stage was brought on line, water injection support started up and gas was exported to Angola LNG. First liquified petroleum gas export began in 2018, and three new wells were drilled in 2019.

million cubic feet per day in 2019

“Our goal is to always operate safely, reliably and in an economically sustainable manner. Projects such as Mafumeira Sul create jobs, build organizational capability and support local content development."

The Osprey heavy lift vessel, pictured here, transported the living quarters topsides and a support frame for the Mafumeira Sul central processing platform from Korea to Angolan waters over the course of 35 days.

community investmentchevron and the global fund: saving lives in Angola

Since 2008, Chevron has partnered with organizations to sponsor community programs related to HIV/AIDS education, awareness and prevention. One such organization, the Global Fund to Fight AIDS, Tuberculosis and Malaria, is dedicated to promoting healthy communities, eliminating new HIV infections among children and keeping HIV-positive mothers alive. In 2013, the company committed an additional $5 million over two years to the Global Fund, bringing its total investment to $60 million.

Chevron works with partners like the Global Fund to Fight AIDS, Tuberculosis and Malaria to promote healthy communities.

In Angola, Chevron is committed to protecting the environment. Since 2006, Chevron and its Block 0 association partners have made major investments in projects designed to maintain environmental quality. In 2015, at the fifth annual International Fair of Environment and Environmental Equipment, Services and Technologies, Chevron was recognized with the award for Best Environmental Technology. This is the second time Chevron has received this award. 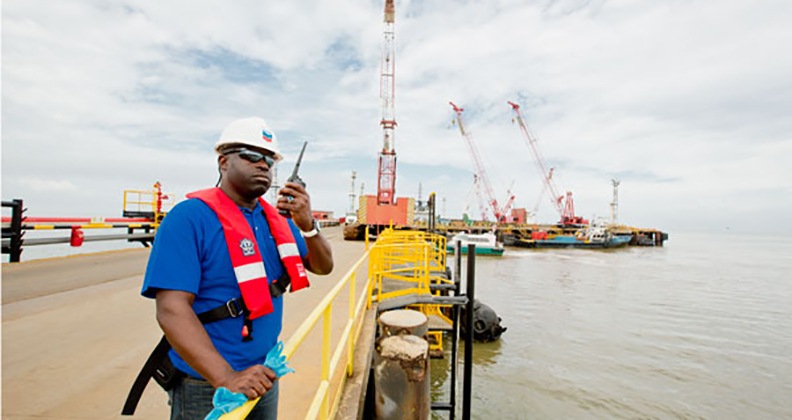 Chevron is Angola’s largest foreign oil industry employer, and more than 89 percent of our workforce in the country is Angolan.