June 5, 2015 – The use of unmanned aerial vehicles (UAVs) and remotely operated aircraft holds great promise for Chevron as multipurpose tools for data collection and the protection of people and the environment. 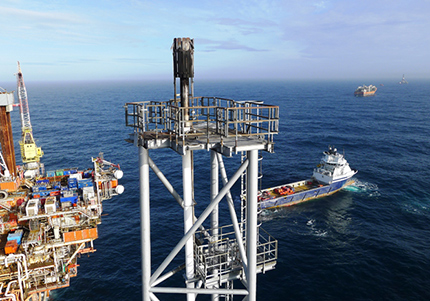 Chevron has used small unmanned vehicles to monitor flaring on North Sea platforms. This photo was taken from an unmanned aerial vehicle.

Until recently, the use of these systems has been tightly regulated in the United States and other countries. But under recently passed U.S. federal regulations, Chevron has received an exemption that will soon enable the company to undertake flights for aerial mapping, surveying, detection of potential operational threats and other safety issues. Eventually, Chevron anticipates using UAVs and other airborne systems to monitor the company's shipping, pipeline, production and other operations.

In the media, UAVs are often misrepresented as drones, which are fully autonomous systems with no human intervention. All current UAVs at Chevron, however, have a human element involved at all times.

Chevron Upstream Europe (CUE) already used small UAVs to visually inspect flare tips on the Captain and Alba platforms in the U.K. North Sea. This has reduced the requirement for the installation of scaffolding and manual inspection of the tips, hundreds of feet above the water, thereby mitigating potential risk to employees and contractors. CUE has used a number of UAVs technologies and based on the quality of the imaging obtained it is likely that these will be deployed again in the future to support the safe and successful inspection and maintenance of its assets.

"We can still get quality of inspection without putting people at risk," said John O'Brien, Facilities, Optimization and Reliability focus manager for Chevron Energy Technology Company.

Chevron's Australasia business unit has also used UAV technology to monitor turtle tracks and nests in the vicinity of the Wheatstone Project offshore Western Australia. The environmental survey data confirmed that UAVs were a non-obtrusive and effective way to gather necessary information while reducing the need for individuals to access the local marine flora and fauna.

The potential of UAVs was demonstrated in 2006 when Chevron Shipping Co. engaged a vendor to perform UAV flight testing in California's Santa Barbara Channel, collecting live video and position information from field locations, which it transmitted to responders in the field. Most notably, the UAV's infrared camera was effective in differentiating the channel's natural oil seeps from the surrounding sea water.

In 2013, the U.S. Federal Aviation Administration (FAA) granted approval for UAV flights over the Columbia River east of Astoria, Oregon, in conjunction with a Chevron Shipping oil spill response exercise. This and subsequent tests demonstrated that UAVs are a proven, reliable technology well suited for aerial surveillance and oil spill response.

"Because all imagery and flight information is automatically captured and recorded by the control equipment, documentation is a strong point with the UAV platform," said Jeff Williams, Chevron Shipping Co. Very Large Crude Carrier fleet operations planner. "With the recent progress in FAA acceptance of small UAVs into national airspace, the technology will soon play a significant role in oil spill response and disaster preparedness."

Added O'Brien: "The technology enables us to have eyes on the ground fast and early without sending people into a hazardous situation."

"The technology can help us with a wide range of issues, from security and surveillance to the question of whether an enhanced oil recovery operation has too much or too little steam," said Ken Lewis, SJVBU's i-field™ Research & Development project lead.

"As government regulations become more defined, the future use of UAVs for CPL could be long-range, beyond-line-of-sight flights to inspect pipeline right of ways for potential leaks, third-party encroachments, and other threats to the pipeline's safe operation," said Michael Cooper, CPL's pipeline integrity management team leader.