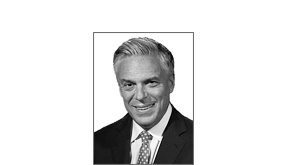 Governor Huntsman is an American businessman, diplomat, politician, and Vice Chair of Policy, at Ford Motor Company since 2021. He served as U.S. Ambassador to Russia from 2017 to 2019 and as Chairman of the Atlantic Council, a nonprofit that promotes leadership and engagement in international affairs, from 2014 until 2017. He has served in the administrations of five Presidents and was a candidate for the Republican nomination for president of the United States in 2011. He was Chairman of the Huntsman Cancer Foundation, a nonprofit organization that financially supports research, education, and patient care initiatives at Huntsman Cancer Institute at the University of Utah from 2012 until 2017. Governor Huntsman served as U.S. Ambassador to China from 2009 until 2011 and two consecutive terms as Governor of Utah from 2005 until 2009. Prior to his service as Governor, he served as U.S. Ambassador to Singapore, Deputy U.S. Trade Representative, and Deputy Assistant Secretary of Commerce for Asia.

Government/Regulatory/Public Policy: Member of the Defense Policy Board at the U.S. Department of Defense. Former two-term Governor of Utah. Former Deputy U.S. Trade Representative and Deputy Assistant Secretary of Commerce for Asia. Former Co-Chair of No-Labels, a nonprofit organization that works across political party lines to reduce gridlock and create policy solutions. Advisor to Ford Motor Company’s President and CEO, and Vice Chair on policy choices.