Our company recently announced first production from the Mafumeira Sul Field offshore Angola, a country where we’ve been doing business for more than 60 years. The second stage of development for the field, this project is part of a continued effort to grow our production capacity in Block 0 and support the advancement of Angola’s oil and gas industry.

"The Mafumeira Sul project is very important for Chevron and Angola, and is supporting the corporation’s priority of completing major capital projects under construction. First production in February 2017 was a major achievement, and ramp-up to full production is expected to continue through 2018."

During peak project activity in 2016, after all the new facilities were successfully installed, more than 1,600 personnel were on site for final hook-up and commissioning activities, modifications to the existing Norte wellhead platform, and tie-ins to three export facilities – all while two rigs were actively drilling in the field. From January 2015 to March 2017, more than 12 million man-hours were logged for project management, engineering, procurement, fabrication, transportation, installation and commissioning activities with world-class safety performance. 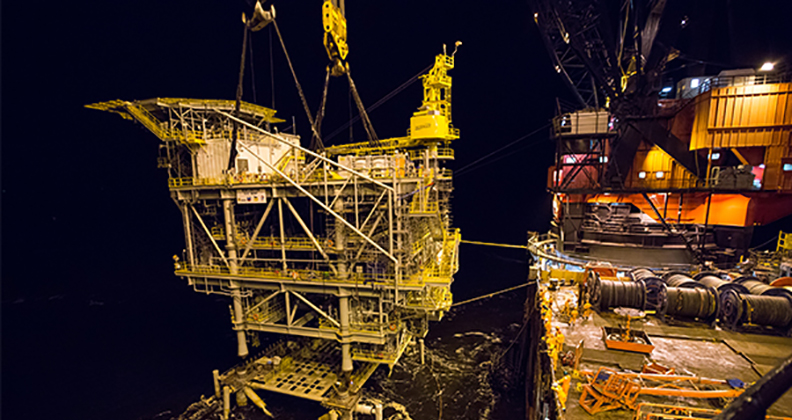 designed for the long term

The Mafumeira Sul project has a design capacity of 150,000 barrels of liquids (crude oil and liquefied petroleum gas, or LPG) and 350 million cubic feet of natural gas per day. Production from the new Sul and Centro platforms, as well as production from the Norte platform, which came online in 2009, will go through the main processing facility.

Oil produced from the project will go to the company’s onshore Malongo Terminal in Cabinda, while gas production will be transported to the onshore Angola Liquefied Natural Gas plant in Soyo utilizing the Congo River Canyon Crossing Pipeline, which was completed in 2016. Propane and butane will be separated from the gas production onsite, converted into LPG, and exported via pipeline to the company’s Sanha floating production, storage and offloading vessel for final processing, storage and sale.

“The Mafumeira Sul project provides significant production capacity for both the near and long term,” said Travis McDermott, Mafumeira Sul project manager with SASBU. “Not only are the facilities designed specifically to commercialize oil, LPG and associated gas from the Mafumeira Field, they also have the processing capacity to facilitate future field developments in Block 0.” 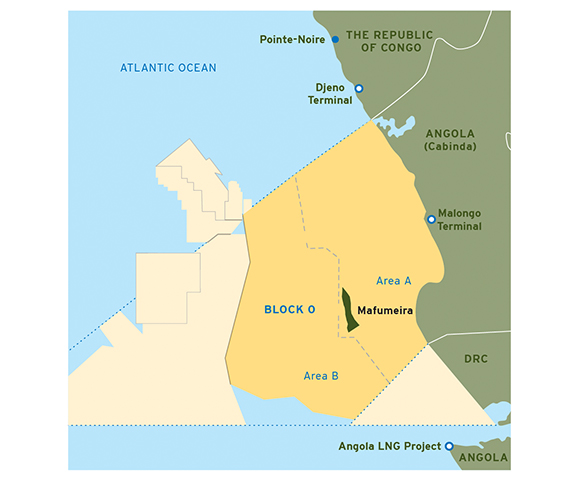 The Mafumeira Sul project has a design capacity of 150,000 barrels of liquids and 350 million cubic feet of natural gas per day. Early production from the Mafumeira Sul Field commenced in October 2016 through a temporary production system. The main production facility was brought on line in February 2017 and ramp-up to full production is expected to continue through 2018.

The Mafumeira Sul project has involved the design, fabrication and installation of multiple facilities, much of which was performed in Angola.

Fabrication of the jackets for the main production facility and the living quarters platform took place in Lobito. Fabrication of the related piles for both facilities took place in Porto Amboim, as did the topsides for the two wellhead platforms. The jackets and piles (which comprise the substructure) for the platforms were fabricated in Ambriz, while the pipeline and tie-in components were fabricated in Soyo and Cabinda.

“The work performed on this project over the last several years highlights a continued effort to expand the capabilities of Angolan fabrication yards, increase the knowledge of Angolan engineers, and add skilled employees to the Angolan workforce,” said Billy Watkins, Major Capital Projects manager with SASBU. “It has also helped elevate the expertise of our existing staff, who will be supporting the project going forward.”

Chevron is the operator of and holds a 39.2 percent interest in Block 0, where the Mafumeira Field is located. Chevron’s Block 0 concession partners are Sonangol E.P. (41 percent), Total (10 percent) and ENI (9.8 percent).