The expectations in our updated Operational Excellence Management System (OEMS) include that our organizations reduce air emissions using a risk-based approach that addresses potential acute and cumulative impacts across the life of our assets. Organizations monitor and analyze performance to verify that the safeguards designed to reduce air emissions are in place and functioning. Our Environmental Stewardship (ES) process and our Upstream-specific Air Emissions Environmental Performance Standard (Air Emissions EPS) are examples of how we execute the air emissions-related expectations of our OEMS.

The ES process directs our businesses to create an inventory of how their activities interact with the environment. These environmental aspects, including air emissions, and their related potential impacts are then used to identify, assess and prioritize environmental risk and improvement opportunities.

Our Air Emissions EPS is applied across our Upstream businesses and capital projects and sets an expectation to conduct an air quality impact assessment for certain equipment. If needed, based on the results of the impact assessment, the Air Emissions EPS specifies design requirements, such as equipment emission standards and control technologies, to reduce air emissions from our new capital projects. Our Air Emissions EPS also sets forth leak detection and repair programs to reduce emissions of VOCs from sources that meet the applicability requirements of the standard.

We have also made significant investments in equipment to reduce air emissions associated with our refinery operations and to meet regulatory requirements.

We collect data on our air emissions, which enables us to make informed business decisions around protection of air quality. We are committed to annually reporting performance data on the common reporting elements in the 2015 edition of the Ipieca/API/IOGP** Oil and gas industry guidance on voluntary sustainability reporting, as follows: 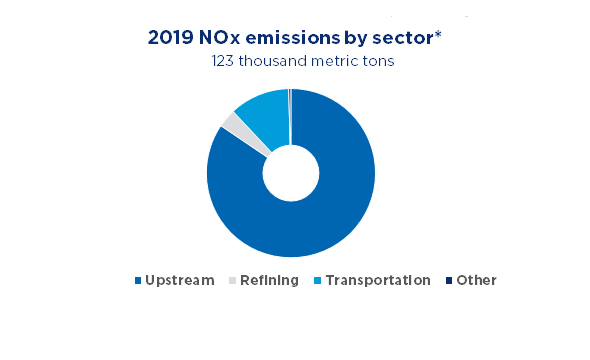 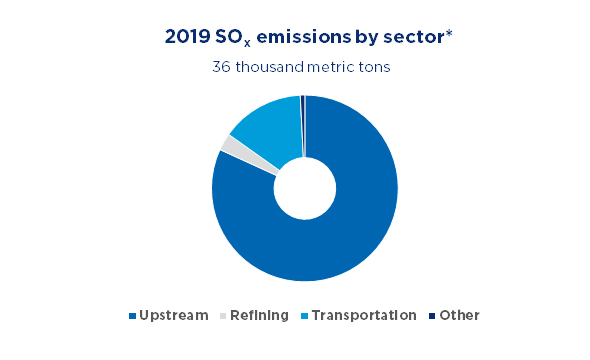 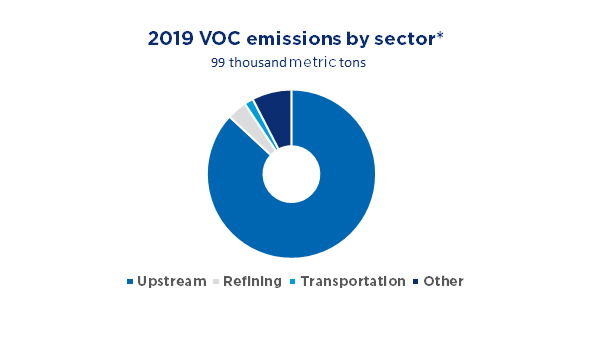 The Singapore Refining Company, a joint venture in which Chevron holds a 50 percent interest, completed a major capital project in 2017 that resulted in a reduction in SOx emissions and increase in energy efficiency. The $500 million project involved constructing gasoline clean fuels units and a dual-train cogeneration plant (“Mogas Cogen”), as well as retrofits to existing furnaces to burn cleaner natural gas.

In addition, SRC has also implemented sulphur recovery projects that reduce SOx emissions. All the above projects support the Singapore government’s goals of a cleaner environment and a more efficient energy industry. In addition, the refinery is now producing higher-quality and cleaner-burning gasoline for the Singapore and Malaysia markets.

Refinery modernization project
In 2019, we completed primary construction of the major components of our Refinery Modernization Project, a major investment to enable us to deliver the energy that improves lives, with less environmental impact. The project is a great example of efforts to improve energy efficiency, reduce air emissions overall and increase the safety and reliability of the refinery. Project upgrades include:

In addition, Chevron worked with a tugboat operator to commission a new multipurpose boat as part of the refinery’s commitment under the Modernization Project. The Caden Foss tugboat is one of the first of its kind and complies with the Environmental Protection Agency’s Tier 4 emission standards for new nonroad diesel engines. Use of this new tugboat will decrease PM and NOx emissions from operations near Chevron’s Richmond Long Wharf.

Community air monitoring program in California
Air monitoring is one of the tools used to measure emissions and help the public better understand local air quality. Since 2013, our refinery in Richmond, California has funded a community air monitoring program. The program, which is operated by an independent expert, provides near real-time data 24 hours a day about air quality in the community. Data is collected and reported from three stations along the refinery’s fence line and three neighborhood stations.

Since the launch of the program, the air monitors have continuously tracked air quality and has been a valuable source of information for the community.

We recognize the value of water as a fundamental societal, environmental and economic resource

Decommissioning, remediation, reclamation and/or abandonment of sites and facilities

2021 Supplement to the Annual Report pdf opens in new window