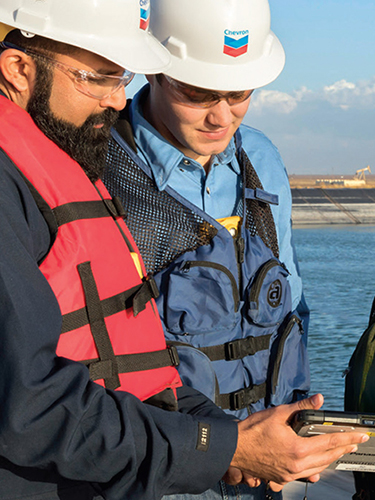 we conserve and protect water resources using a risk-based approach

“Turning what was before wastewater into a reusable resource is good water management, is good for the Permian and is good for our business. It’s an exciting leap forward.”

Chevron recognizes the value of water as a fundamental societal, environmental and economic resource. As a global company, we know that access to water is essential for the communities where we operate and for our business. To produce energy around the world, we rely on access to sufficient sources of water, including both fresh water and water of lower quality.

We have management systems, processes and standards to manage this critical natural resource in alignment with The Chevron Way and our Human Rights Policy.

To promote responsible management of water resources, we:

Chevron strives to responsibly manage our water usage. For example, in the Permian Basin we have increased the reuse of water produced during oil operations. Chevron has implemented innovative produced water recycle strategies for drilling and completions that decreases reliance on other water sources. Research shows this reuse of produced water is not detrimental to well longevity because the chemistry of the underground formation undergoes fewer changes. Reuse of produced water for these operations is sensible and fit for purpose.

Likewise, our Canada business unit invested in freshwater storage and pipeline infrastructure in Kaybob Duvernay, Alberta, to reduce our operational footprint and reliance on river water during low-flow periods in summer and winter.

The expectations in our updated Operational Excellence Management System (OEMS) call for our organizations to conserve and protect water resources using a risk-based approach that addresses potential acute and cumulative impacts across the life of our assets. Organizations monitor and analyze performance to verify that the safeguards designed to conserve and protect water in water-constrained areas are in place.

Our Environmental Stewardship (ES) process, our Environmental, Social and Health Impact Assessment (ESHIA) process, and our Upstream-specific Natural Resources Environmental Performance Standard (EPS) are three examples of how the water-related expectations of our OEMS are executed.

The ES process directs our businesses to create an inventory of how their activities interact with the environment. These environmental aspects, including use of water, and their related potential impacts are then used to identify, assess and prioritize environmental risk and improvement opportunities.

The ESHIA process is used by local project teams early in the life of a project to assess the potential impacts and benefits of our activities on natural resources, including water. An important part of this process is assessing existing environmental and social conditions, such as how local communities are using water. This information is used during project planning to help us consider and address potentially significant water use by our operations in relation to local water availability.

Our Natural Resources EPS is applied across our onshore Upstream business and capital projects and calls for a water resources screening assessment. Together with our ESHIA process, these tools help to identify potentially significant environmental and social impacts associated with our water use. The water resources screening assessment evaluates and helps us manage the following risks that may be associated with our water use:

Where there is potential for significant impacts, a water resources management plan (WRMP) is developed. The WRMP helps our operations identify and implement measures that reduce water withdrawals when possible.

We collect data on the amounts of fresh and nonfresh water we withdraw from the environment and the amount of fresh water returned to freshwater sources, which enables us to make informed business decisions around water management. In addition, we annually report performance data on the common reporting elements specified in the 2015 IPIECA/API/IOGP Oil and gas industry guidance on voluntary sustainability reporting.

Track our performance against a number of these metrics

managing water use in hydraulic fracturing

Chevron strives to minimize the amount of fresh water used in our hydraulic fracturing operations.

Using alternate sources of water in the Permian
In the Permian Basin, we primarily use brackish and recycled produced water in lieu of fresh water. Today, more than 99 percent of the water used in our well completions is from brackish or recycled water sources.

water recycling at our refineries

Jurong Island, Singapore
In 2017, Singapore’s national water agency awarded the Singapore Refining Company (SRC)* the inaugural Water Efficiency Award in the Refining category for its efforts in water recycling. The SRC built a recycling plant that further manages treated wastewater that would otherwise be discharged to the sea. The plant uses ceramic microfiltration and reverse osmosis, removing suspended solids, oil, grease and other contaminants from the used water. Water from the new plant meets both industrial and potable water specifications and is recycled back to the refinery’s boiler feed water. The plant currently meets approximately 20 percent of the SRC’s water demand.

Richmond, California
We have invested in technologies to reduce our freshwater usage. As a result, our refinery in Richmond, California, has become the largest industrial user of reclaimed water in the San Francisco Bay Area. Together with our partners, we have worked to overcome barriers to reclaimed water use. One such project that contributed to this achievement was the Richmond Advanced Recycled Expansion (RARE), a joint effort with the East Bay Municipal Water District. Through innovation and collaboration, the RARE Water Project facility greatly increased the daily allowable capacity for use of reclaimed water at the refinery, to more than 6 million gallons.

* Water of lower quality could include: seawater, brackish groundwater or surface water, reclaimed wastewater from another municipal or industrial facility, desalinated water; remediated groundwater used for industrial purposes.
** Water that is brought to the surface when extracting oil and gas
*** A Chevron 50 percent-owned joint venture.

Decommissioning, remediation, reclamation or abandonment of sites and facilities