we’re a proud proponent of diversity in the workforce, and we support an inclusive workplace that values the diversity of ideas
chevron employees talk about the chevron way value of diversity and inclusion video opens in new window

Chevron is committed to fostering diversity and inclusion at all levels of our company. It is a cornerstone of our corporate values of high performance, integrity, trust, partnership, and protecting people and the environment. We know that hiring and retaining individuals with an array of talents, ideas and experiences propels the innovation that drives our success. A diverse workforce and inclusive culture help us strengthen areas that need improvement and inspire creative solutions. We believe the attention given to diversity and inclusion makes us more agile, trustworthy and innovative.

Chevron’s diversity and inclusion programs aim to foster a truly inclusive workplace that encourages more meaningful engagement among all employees to strengthen our performance.

Our diversity and inclusion initiatives have earned recognition from several leading diversity organizations and publications.

2022 Best Place to Work for Disability Inclusion
The American Association of People with Disabilities and Disability:IN have recognized Chevron with a 100% rating on the 2022 Disability Equality Index, maintaining our top score for the fourth year in a row.

Forbes
Forbes and Statista name Chevron to the 2021 list of America’s Best Employers for New Grads.

Forbes
Forbes and Statista name Chevron to the 2021 list of World’s Best Employers.

Forbes
Forbes and Statista name Chevron to the 2019 list of America’s Best Employers for Women.

National Association of Black Engineers - 2019
Honored as one of 12 organizations that made a positive impact by investing more $100,000 in Black/African American communities.

The "Top 50 Stem Workplaces" list cumulates organizations setting the standard for indigenous science, technology, engineering and mathematics (STEM) professionals. This is Chevron’s 5th year in a row to be recognized.

In 2015, Chevron was honored to receive the prestigious Catalyst Award, the premier honor for companies committed to expanding opportunities for women. For more information about the award, visit chevron.com/2015-catalyst-award.

In 2016, Chevron’s Women’s Network launched the Men Advocating Real Change (MARC) initiative developed by Catalyst, a nonprofit that provides resources to engage men as more active and visible champions for gender inclusion. Participants in MARC are committed to achieving workplace gender equality by improving opportunities for women to compete for roles at all levels. Research by Catalyst shows that when men are actively involved in gender diversity, 96 percent of companies report progress. When they are not, 30 percent show progress. MARC programming helps both men and women break down unconscious bias and other barriers to inclusion. In its fourth year, MARC exceeds 3,500 participants – 60 percent of which are men – in 11 countries around the world.

In 2019, Chevron announced a $5 million grant to Catalyst in support of expanding the organization’s MARC program. The Chevron grant will directly support the global expansion of MARC leaders, Catalyst’s immersive training program. It will also support the rollout of MARC teams to Catalyst Supporter companies across the globe, creating a grassroots collective approach that helps men apply their influence to affect positive change in the workplace with respect to gender equality. For more information about Chevron’s grant to support MARC, visit chevron.com/chevron-marc-grant.

In 2020, Chevron made a $15 million pledge to support the Black community in the United States to address barriers to equity. A year later, we continue to address racial barriers through education, job creation, talent and leadership development, and community and small business partnerships.

Since establishing our formal racial equity plan, we have progressed the following initiatives:

Supporting the Thurgood Marshall College Fund (TMCF), which named Chevron Vice President and Chief Financial Officer Pierre Breber to its board of directors. Our sponsorship contributes to a TMCF scholarship program and creation of the Chevron Energy Innovation Summit, which features Chevron executives as speakers and other employees as judges in business case study competitions.

Expanding our Chevron Leadership Academy by establishing an academy at Prairie View A&M University. The program promotes leadership skills in students in the business, engineering and science disciplines and helps increase our access to diverse talent that can contribute to the company’s future growth.

establishing a supplier diversity governance board

Establishing a Supplier Diversity Governance Board that provides strategic direction and oversight of Chevron’s supplier diversity strategy across Chevron’s U.S.-based business units. In addition, Chevron collaborates with major suppliers on an ongoing basis to influence their adoption of our commitment to supply chain inclusion. A recent win includes updating Chevron’s procurement policies on our Amazon purchasing platform, which, by the end of 2021, resulted in a fivefold increase in purchases with small and diverse sellers through this platform vs. the historical average.

This commitment to a diverse and inclusive supply chain is founded on the belief that the use of inclusive practices in the procurement of goods and services creates a business advantage for our company, supports local economies and creates prosperity in regions where we operate.

a number of firsts

We’re proud of being the first major integrated energy company to:

we are all accountable

Reinforcing the critical importance of diversity and inclusion to business performance, The Chevron Way holds everyone accountable in advancing diversity at all levels of the company. Diversity Action Plans are required for nearly every employee, including the Chairman, and are part of annual performance reviews. Diversity and inclusion accountability metrics are tied to compensation for the corporate executive management team.

Chevron has more than 15 diversity councils across its business units that help management align diversity and inclusion efforts with business strategies.

Chevron was honored with the Catalyst Award for efforts related to attracting, retaining, developing and advancing women at Chevron. Hear from executives and employees about the company’s 20-year journey to increase diversity and inclusion in the workplace.

Diversity and inclusion are cornerstones of The Chevron Way values and are critical to ongoing business success. An inclusive work environment that values the diversity of our employees’ talents, experiences and ideas, leads to more innovation and ultimately higher performance. The Chevron Way’s focus on people has helped establish a culture that attracts, develops and retains more diverse talent.

Partnering is critical to our success in attracting talent – we partner with governments, communities and educational organizations across the entire educational pathway. We build trusting and mutually beneficial relationships with strategic partners and are most successful when our partners succeed with us.

Our intern program is critical to building Chevron’s early-career talent pipeline. Even as we worked remotely during the COVID-19 pandemic, we continued our internship program virtually the past two summers, minimizing gaps in the talent pipeline, which resulted in a 91% full-time offer acceptance rate in 2021.

Chevron’s Welcome Back Program was created to hire, support and develop talented people who left the workforce for personal or family reasons and desire to return. Individuals complete a 12– to 16–week “returnship” focused on training, coaching and acclimation. Chevron is now considering a broader pool of candidates, flexible work options and a rolling cohort model so that we may hire into the program at any time during the year.

Building on neurodiversity programming introduced in 2020 and with support from Chevron’s ENABLED Employee Network, our retail station business continued a neurodiversity employment program at 24 company-owned and operated service stations in Central and Southern California. The hiring of neurodiverse individuals exemplifies ENABLED’s goals of expanding opportunities to people with disabilities and reinforces Chevron’s commitment to employee diversity and inclusion.

In collaboration with the American Petroleum Institute’s Diversity, Equity and Inclusion working group, Chevron is leading a workstream with Opportunity@Work, to recruit talented individuals from less traditional educational backgrounds and promote diversity. This pilot is ongoing in the San Francisco Bay Area and is set to launch in Houston in 2022.

We have forged strategic relationships with numerous colleges and universities around the world – developing programs that will empower students and help us to enable human progress.

other partnerships and programs

To help improve opportunities in STEM education for young girls, we convened sessions with the National Science Foundation, NBC Learn, and more than 15 professional and diversity associations to develop the Women in Engineering Educational Outreach and Training curriculum to arm teachers with materials on engineering that will help expand the pipeline of talent.

We have an incredibly talented workforce willing to share its knowledge in our various mentorship programs. All employees have the option to find a mentor on their own or with the help of a supervisor, through programs specific to their business unit. Our employee networks also offer formal mentoring programs.

In 2019, almost 20,000 employees – nearly 45 percent of our regular workforce – participated in Chevron’s employee networks that celebrate and promote diversity. These networks act as a resource for attracting and retaining talent and enhance Chevron’s reputation through community activities and outreach. They also provide formal mentoring programs and offer opportunities for skill building and career development.

Aligning with our diversity goals, employees define measurable objectives they will be accountable for – and graded on – as a part of our annual performance evaluations. These plans can be tied to compensation and help achieve our vision of diversity.

To help ensure that our employees understand our policies and know how inclusion is practiced throughout our company, we provide opportunities such as diversity training, guidance on personal diversity action plans and lunchtime diversity learning sessions.

To promote diversity and inclusion, we host more than 15 diversity councils across our business units and corporate functions that actively support our strategic approach to diversity.

This year, as Chevron commemorates the 30th anniversary of our employee PRIDE network, we celebrate the spectrum of identities and experiences across our workforce and the intersections that make each of us unique.

Chevron is proud to commemorate the 30th anniversary of our employee PRIDE network.
employeesengaged

To strengthen organizational capability, we develop our employees’ and contractors’ skills and experience through our Invest in People strategy.

As part of our Invest in People strategy, discussions focused on continually improving individual performance are held between managers and employees. In 2021, our eligible employees completed these performance discussions and set annual developmental objectives.

Skill development occurs at each stage of our employees’ careers. For example, all new employees are expected to participate in the onboarding learning journey – including the New to Chevron workshop – within their first six months on the job.

Our Horizons program is an accelerated development program that builds the technical competency of employees who have fewer than six years of industry experience.

We’re also helping employees expand their horizons and plan for future positions with Gigs Marketplace. This digital platform allows employees to apply for short-term project opportunities across the organization to grow their capabilities beyond their current roles.

Chevron strives to communicate openly with our more than 44,000 employees. In addition to our annual Worldwide Employee Town Hall, business units around the globe conduct town hall forums and meetings, addressing topics such as safety and business performance, as well as engaging with employees on a wide variety of other topics.

Every three years, we conduct a survey of our employees worldwide to understand their level of engagement, assess Chevron against the attributes of a high-performance organization, and measure the impact of our people development programs. This survey is supplemented by Pulse Surveys of our employees, which measure our progress and reinforce Chevron’s high-performance behaviors. Our most recent employee survey found a total employee engagement score of 90 percent – among the best in the oil and gas industry. In addition, 94 percent of employees surveyed reported that they “believe strongly in the goals and objectives of Chevron” and 93 percent reported being “proud to be a part of Chevron.”

We’re promoting an inclusive business environment, one supplier at a time. 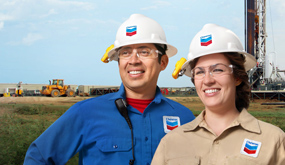 Our values distinguish us and guide all of our business activities and decisions.

Our respect for human rights is rooted in our values and applies wherever we do business.